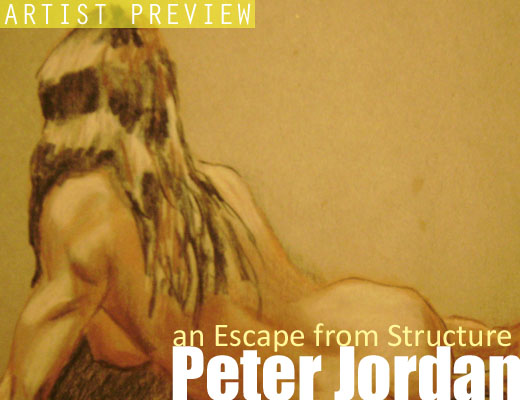 On Saturday, March 19 2011, Karman Orange welcomes Peter Jordan to the Santiago Art District art walk.  As a financial guru by day, Peter will exhibit his current work of sketches inspired by what he calls the Escape from Structure.  "I have had too much structure in my day to day life," explains Peter, "That's the push. The pull is grace and fluidity of form. I love the contrast between the structure of the human form and it's constantly changing shape in space."

Peter currently resides in Los Angeles, but also considers New York home.   He describes himself as a closet artist who draws for his own enjoyment and therapy.  His favorite artists include Matisse, and sculptures by Maillol and Degas.  He learned his art from studying life.  "Living in big cities like NY, Chicago, London and LA has allowed me the anonymity to watch people coming and going. I believe this has developed the gestural qualities of my art."  Peter's art have recently been on display at Cannery Row gallery in Redondo Beach.   Peter enjoys working in charcoal and conte crayon on newsprint, and occasionally with pastels.  "I prefer newsprint for it's tooth."  He also uses clay to create figure pieces.  "It is in clay that I have explored abstract expressionism."

Peter feels a strong relationship between music and art. "Music needs rhythm and melody with accents of percussion," describing his personal theory towards art, "I believe the artist's stroke requires the equivalent to keep the viewer's attention, curiosity and surprise."

Peter Jordan will be on exhibit at Karman Orange, open to the public, on March 19 2011.  Private screenings available by appointment.

The Santiago Art District Art Walk is a free event, held on the third Saturday of each month from 7pm to 10pm. It is located in the city of Santa Ana, CA at the intersection of Santa Ana Blvd, and Santiago Blvd, across the street form the Santa Ana train station. Free parking available at the train station.
Posted by John Lai at Wednesday, March 16, 2011